If you would like to see the whole blog post about how my Farmer's Wife quilt became known as the Pilot's Wife quilt you can read the original story over on my other blog HERE.

Or here is the recap of HOW THE FARMER'S WIFE BECAME THE PILOT'S WIFE...

No, I am not revealing a secret prior marriage!

I've been working on the quilt from the book called The Farmer's Wife by Laurie Hird. The only problem is that there are no piecing instructions or cutting directions. The templates on the CD are given one per page, so that they would have to be printed out on hundreds of pieces of paper (such a waste!)

So, I began with the simple blocks first and used the directions offered on several different blogs and websites. But the blocks started getting more complicated and the math more confusing. My seam ripper was getting way too much use!!

I started altering the blocks to make the math easier, the piecing simpler, and getting better results. So now these blocks aren't really the ones in the book anymore. Some are similar, but some are not even close! More than two thirds of the blocks in the finished quilt will be mine entirely. I had planned to use a different setting from the very start. I also changed the color scheme to red, cream and tan so that it would look pretty in my bedroom.

But after all these changes, I felt it only natural that the name needed to change as well. Since I am married to pilot, it only makes sense to call it The Pilot's Wife, at least I think so!

And THAT is how the farmer's wife became the pilot's wife. No messy divorce or tragic death, just a simple transition from one set of blocks to another.

Last night I counted up the blocks I've made so far and realized that I have 70 completed! 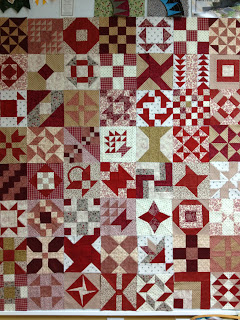 (this is NOT all of them, just the ones that would fit in the photo!)

I am going to change up the setting because I have this idea that setting the blocks in vertical rows with a dark red sashing in between the rows will look really nice on my King Size bed. I think I worked out the math last night, now I just need to make some final fabric choices.

I also think I am going to remake some of the blocks. Some of them are not going to look good set on point (just my opinion) so I will be going through the blocks and choosing which ones to replace.

Luckily, Randy over at the Barrister's Block  has offered up some really wonderful "bonus" blocks to choose from.

It's really just a matter of remaking a few blocks and getting it all together.

Email ThisBlogThis!Share to TwitterShare to FacebookShare to Pinterest
Labels: The Pilot's Wife