New Pattern in the shop!

I'm so excited to share a new pattern with you! 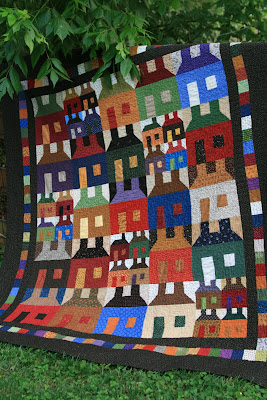 Obviously, there is a story behind that name. Many years ago, I made my husband (Mr. Knott) a quilt for his birthday. It was a beautiful red and blue log cabin quilt. It was made to snuggle under while in the recliner in his home theater. I made it extra long, since he is tall. I put love into every stitch of that quilt. He accepted it very kindly and thanked me.

But he did mention to me that it wasn't a REAL quilt because it didn't have any borders on it.  WHAT? Seriously, has anyone ever heard such a ridiculous comment? Since we love to tease each other, we often referred to his quilt and the lack of borders which undoubtedly meant my love for him was not what it should be.

Over the years, as I made quilts for others, he would comment about how many borders each quilt had and how much I must love the recipient. In his mind...borders=love.

So a couple of Christmases ago, I decided to surprise him with a quilt of his very own, with THREE borders. Surely that would prove my love! We don't normally exchange gifts with one another at Christmas, a hug and a kiss and we're happy. So imagine my surprise when he produced a present for me...a little travel sewing machine to take on retreats! (Granted I may have dropped a few hints about how nice it would be to have one...but I never thought he could go out and get the right one all on his own!) We were both so amazed that we had pulled off mutual surprises at the same time.