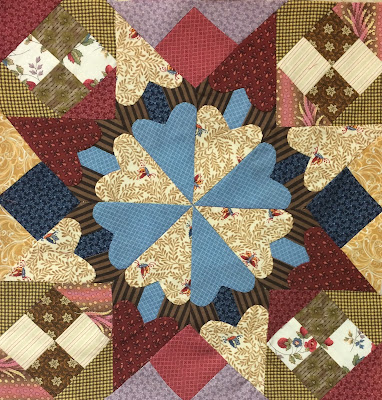 I finally pieced the third and last star block for the 1718 Coverlet. I had made the other two quite a while ago and just didn't have the courage to face making another one. I am not sure how it is supposed to be done but my method worked. I traced the hearts with seam allowance onto freezer paper and cut them from the fabrics. I machine pieced three small strips for the background between the hearts. I then hand appliqued the hearts onto either side of the strip set using a placement guide that I traced from the original block. Then I removed the freezer paper and trimmed the strip set even with the edges of the hearts to make the diamond shaped units. Once those were made I pieced the star and then added the corners and side units stitching by machine. It required far less ripping out and redoing than I anticipated...then again I had a pretty pesimistic attitude. But now it's DONE.

And I have less than 20 small applique blocks left to complete.
I'll work on those when the mood strikes.

This weekend I made a quilt for a friend who is going to need it. I'll share the photos and story after she has received it. Don't want to spoil any surprises!