or What I learned about Writing a Quilt Book Pt. 2... 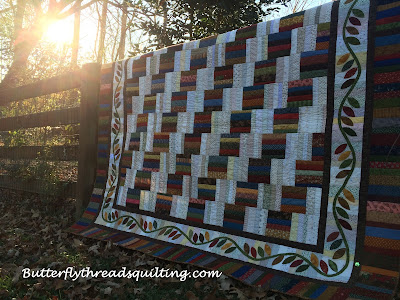 I mentioned I began research online about publishers. I didn't mention that I started that process in the fall of 2013. I got invited to a meeting at market with a publisher and went to market in May of 2014. I sent in my book proposal and had it accepted in July of 2014. Contracts were signed in September of 2014. So I was almost one year into the process before it even became 'real'. Others may work faster than me, but I like to do my homework. Some folks refer to it as 'neurotic' but I prefer the term 'thorough'. So let's go with that, ok?

I discovered that the timeline was going to be set by me. Me? What the heck do I know about how long it will take me to make 16 quilts and write five chapters and 16 sets of instructions? Truly, I had no idea. I was able to ask for advice about what is realistic in most cases. I'm sure this varies greatly from author to author. But never having done this I didn't have a clue.

So I decided to work backwards. When did I want my book to debut? Naturally, prior to a quilt market would be ideal I assumed. Having been told it would take about 1 year from the time I finish the quilts and the writing until the book hits shelves (that year involves multiple sets of edits, and printing). It was September 2014 at the time, so I knew fall quilt market was not an option. Spring quilt market is in May 2016, so April 1st 2015 became my goal. If I could have everything finished and turned in by April 1st, then surely the book would be ready by the next April in time for May 2016 quilt market. That would even give me a few weeks of wiggle room.

I learned that the quilts had to be turned in six weeks prior to the final 'package date' which includes everything else other than the quilts. The 'everything else' is the manuscript, samples for photos, samples for demos, step by step samples, anything that is going to be included in photos for the book, and a list of photos as well as the photos that they will retake professionally.

So that meant the quilts would need to be mailed on March 18, 2015. The first draft of the book would be due six weeks prior, on February 2, 2015. The sample chapter would be due in November 2014. The finalized outline would be due in September. Gulp. It was already September. I had only made two of the quilts. That basically gave me five months to make 14 quilts, get them quilted, write all of the patterns and write the manuscript as well.

How in the heck did I think I could possibly do that? I still have no idea how it happened, but I did it. And I loved every minute of it. I work well under pressure and I even hand quilted two of the quilts. I machine quilted 6 of the quilts and sent 8 quilts to my longarm hero. And no, that's not too strong of a term for her.

From September 2014 until March of 2015 life was a whirlwind. I contacted suppliers for fabric, batting, and supplies. I sewed and sewed and sewed. I machine quilted and hand quilted. And let's not forget get that we got a new puppy for Christmas during this time period. So lots of puppy snuggles on the quilts while I quilted. 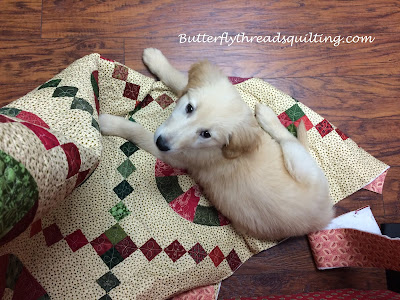 Don't forget that I was teaching and doing guild programs during this time. I was still writing for Craftsy on a regular basis and I was desperately trying to keep up with three teenagers. So imagine how it felt when I mailed off those three huge boxes of quilts in March? And then all of the rest of the stuff in April. I went to the beach for a week! Woohoo! It was wonderful. I was free and so proud of all I had accomplished.

I didn't really see or hear anything about the book again until July2015. That's when I found out that they had photographed everything and organized it all. I then got daily lists of questions from the technical editor. God bless that woman for her patience! She was so wonderful to work with. She's really good at math too. So when my patterns were changed from using 18" strips to using 13" strips, she could do all of that figuring. I'm sure she rolled her eyes plenty and probably wondered why she got stuck with a brand new author, but she never once made me feel overwhelmed. She was so encouraging and enthusiastic. She even loved one of my tips so much she said she had to run to her sewing room to try it right then! How cool is that?

In August, we had a process called 'flow' where all of the photos and text are merged together for the first time. It was fun to see things finally come together in one place. Up to this point all of the text was in one document, and all of the photos were in another and they were all cross referenced. It kind of made my head spin.

In September (last month) I got to see a few of the pages designed and 'styled'. I got to see what my book would finally look like. And after some clarification, and changes, and more changes, it's almost what I had in mind. You see, authors don't get final say on things like 'fonts' and details like that. There are experts who know what is most appealing and what will be best for marketing. So don't judge me on the font please, it wasn't up to me! LOL

We are now working on the final step which is called 'pages' and it's basically the book printed in color on copy paper. I am making corrections for typos or tiny things that need adjusting. I also have some ideas and suggestions that may or may not fly. But I won't know until I ask. Once we finish up those changes in the next week, the book is off to be printed.

It will take until next March to get printed...ever hear the phrase "Slow boat to China?" Now I know where that came from.