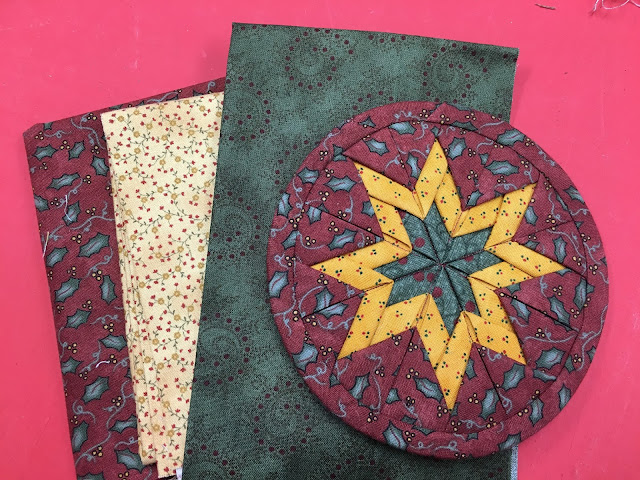 I shared the folded star hot pads I made last week and I also showed these mini versions of the folded stars that I made into ornaments. They are the perfect size for coasters too! I used this pattern for the large stars and found it worked well. I decided that a simpler version, based on the same idea would be fun for this mini size. This size requires no special tools and uses different size fabric squares so while it was inspired by the pattern, please don't think using this method will work for those. This is just a little quickie fun project. 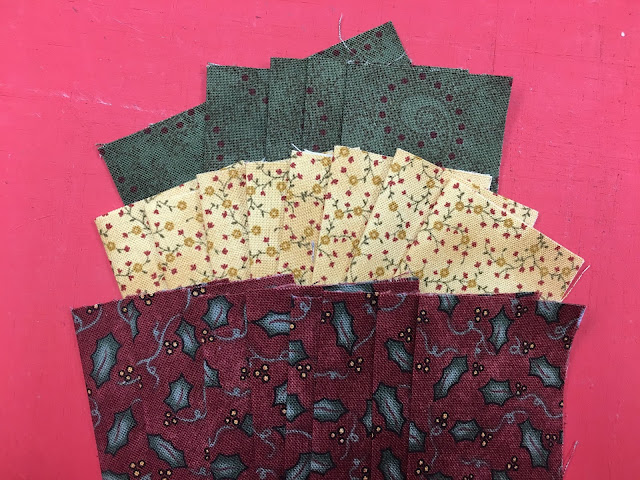 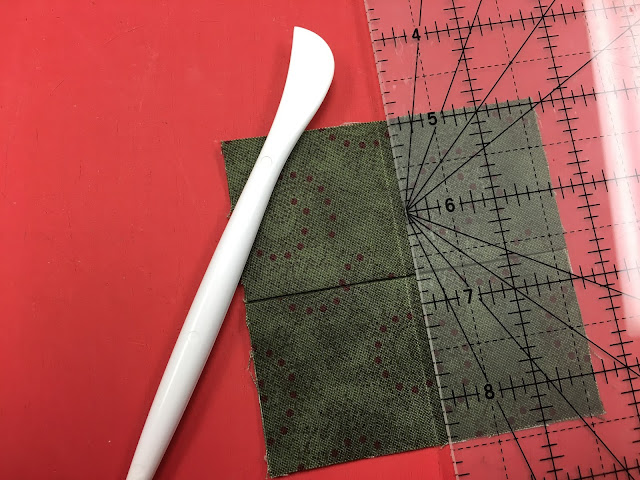 Fold and press all of the squares in half EXCEPT one of the center squares. Now mark all of the folded squares down the middle using a marking pencil or a Hera Marker (which just leaves a crease). You could also press them in half quickly to create the crease. This line will just be used for positioning, so it should be easily removable. 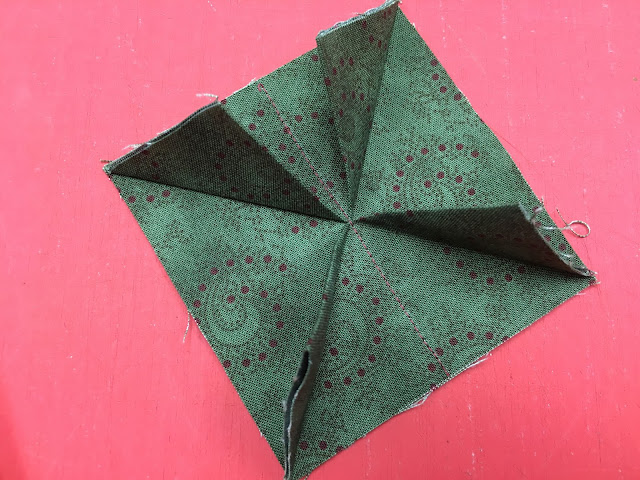 Layer two of the folded center squares on top of the unpressed square. Sew a line along the marked line from edge to edge and then press back the corners of the sewn folded squares as shown. This is essentially what we will be repeating in every step! 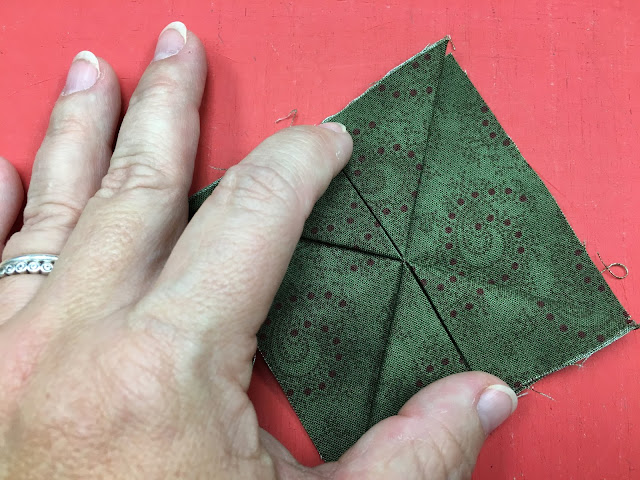 Secure these folded corners out of the way with pins or binding clips where my thumb and finger are shown in the photo above. It's important that the added pieces don't get caught in future seams. 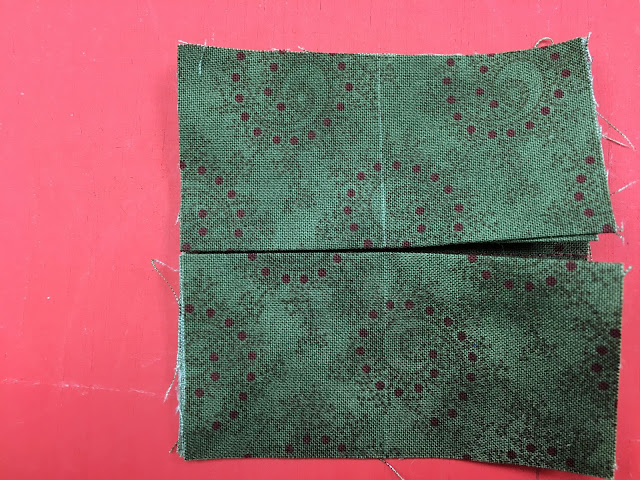 Rotate the sewn and secured unit and repeat the same step going the opposite direction. 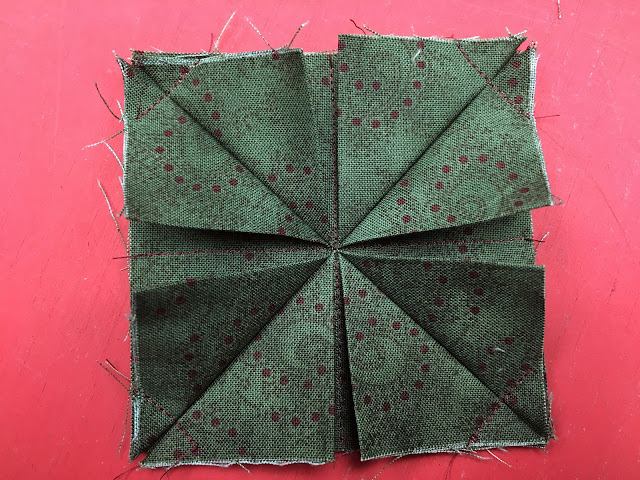 Now press these folded units back in the same way as you did the first two units. I secured the corners with a few quick stitches to hold the folded corners down. Even though I pressed this with a hot iron, there are lots of layers of fabric here and they want to pop up if they are not secured down. 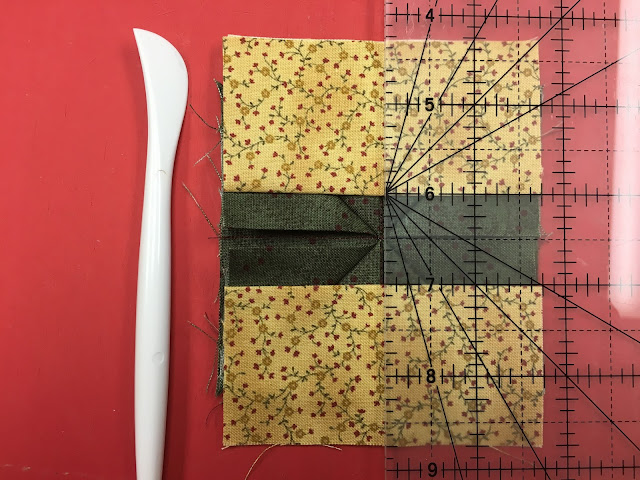 Using a ruler, place the folded squares (middle fabric) on top of the unit. Notice that I was able to line up the side edges with the unit but I measure 1/2" away from the center line. Sew from edge to edge on the marked center line. 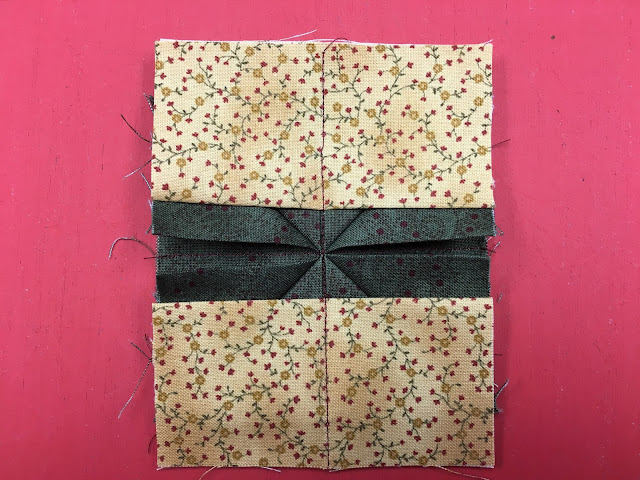 These do not need to be pressed before the step because they are not near the stitching line and won't get in the way. 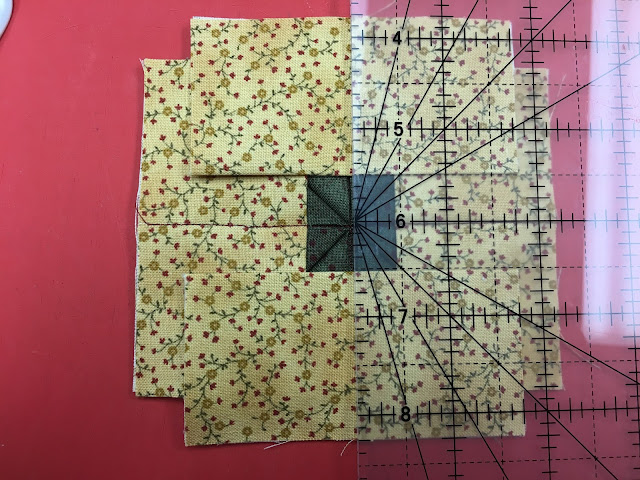 Rotate the unit and place and sew the two remaining middle folded squares in the exact same way as the first two. Measure 1/2" away from the center and line up the marked fold with the center stitching line. 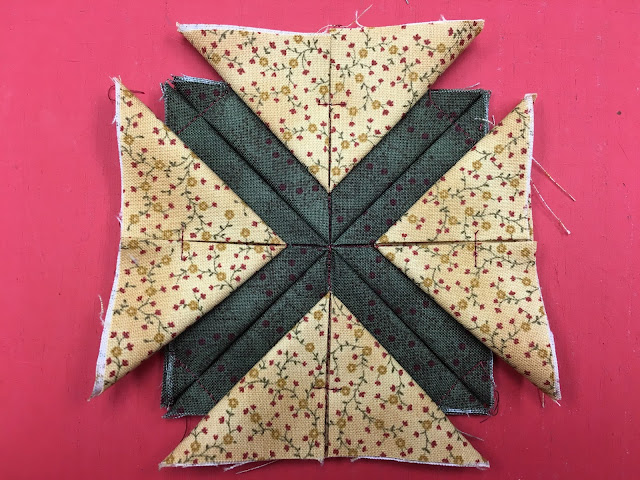 Press the corners back toward the sewn lines and secure with a few stitches near the edge as shown. This will allow the fabrics to stay in place and the stitches will not show later. 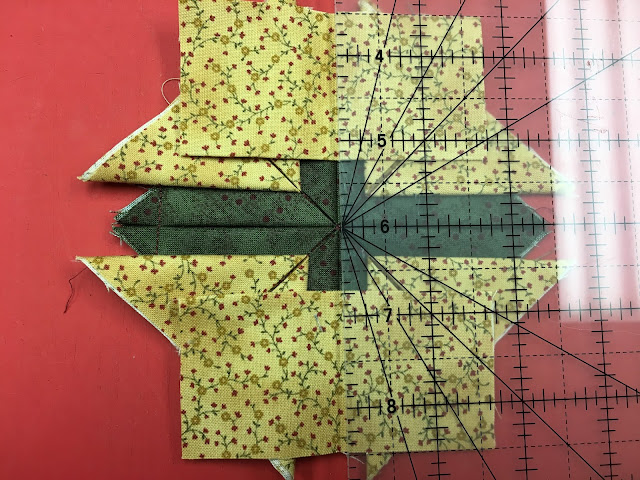 Rotate the unit and repeat all of the same steps on the diagonal this time. Notice that the pieces are moved another scant 1/2" away from the center. 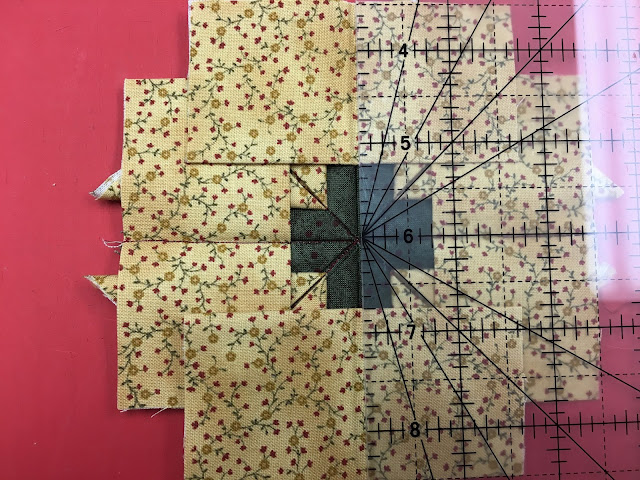 Once these are secured, rotate again and repeat. 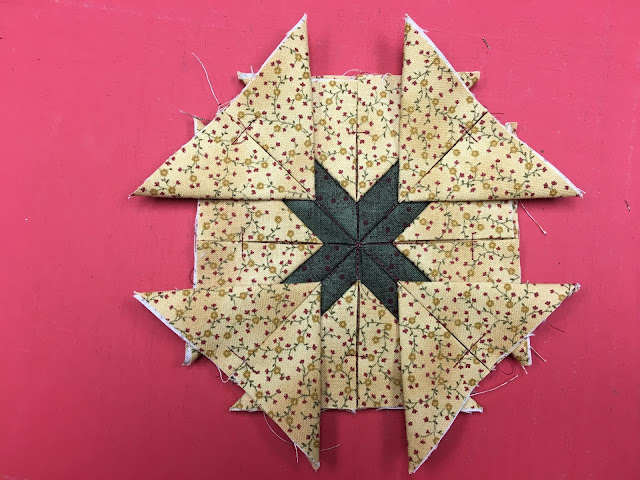 Fold, press and secure as before. You have created the inside star! 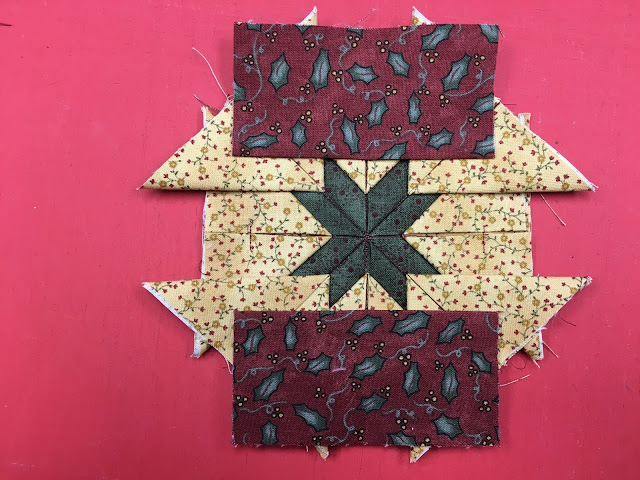 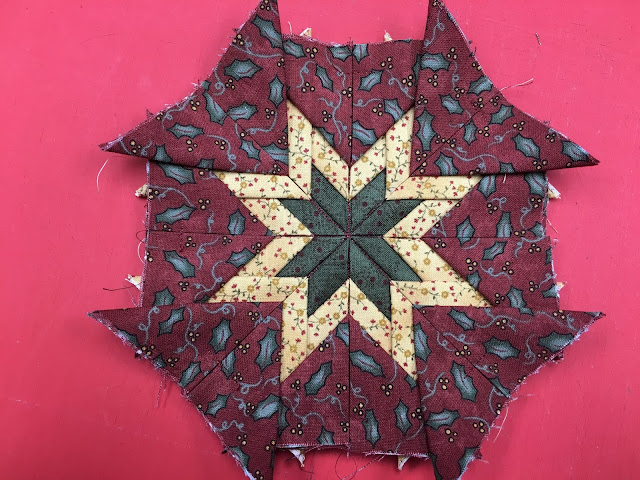 Now you have created the middle star! 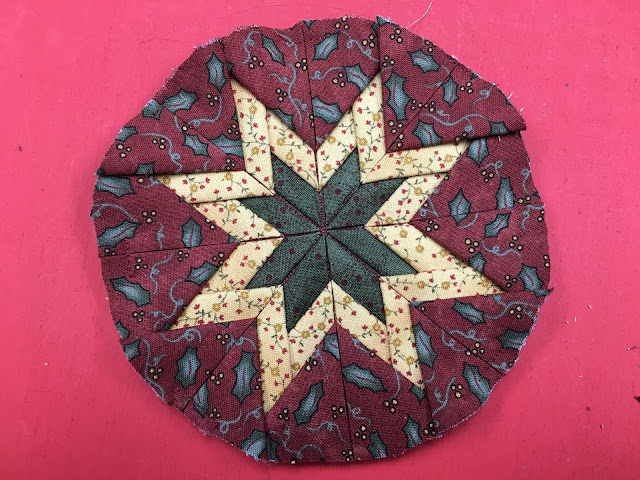 Mark a circle around the edge of the secured stitching and trim. This will finish between 4 1/2''-5'' Layer on top of the wrong side of the backing square and trim it to match. Using bias binding, bind as you would any quilt. Attach a ribbon or hook to the back if you want to use it as an ornament. 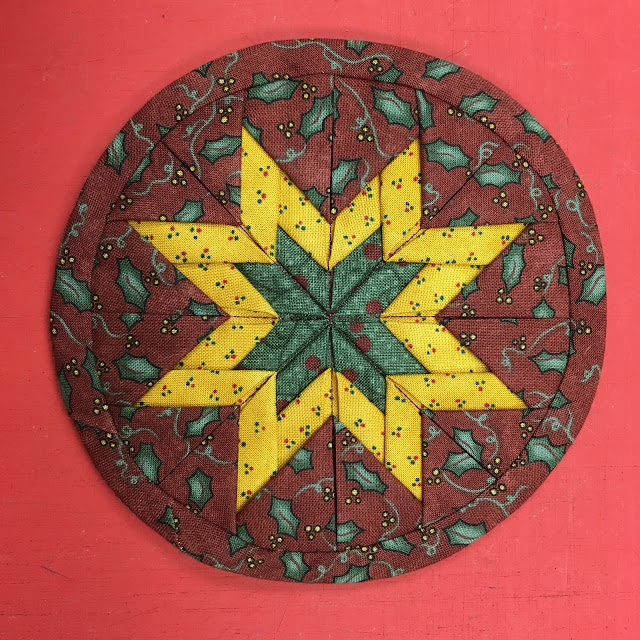 Have fun and if you want to make more than one, these work really well done assembly line style!

And if you just want to be inspired by some amazing folded fabric quilting projects, check out what Rachaeldaisy has been up to. It will amaze you!!