Step 1 of the Sew your Stash Along 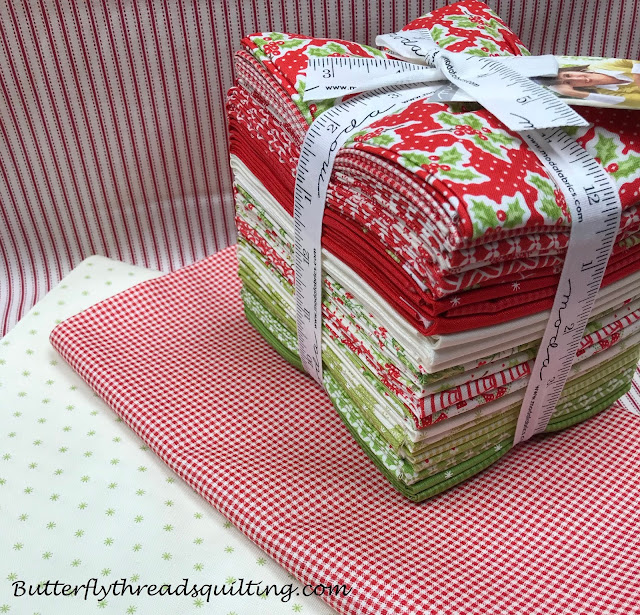 If you are following along with the Sew Along that I announced last week HERE. You will notice that it is called the "SEW YOUR STASH ALONG" and is meant to help you use up your stash. I had a birthday recently and I decided to buy the new Christmas fabric bundle from Fig Tree. And while I was at it, I picked up 2.5 yards of the cream with green print for the background and .5 yards of the tiny red check for the binding.

Okay, I know what you're thinking. But aren't we supposed to use our stash!?!?! Technically, if I bought it and then put it in my sewing room, it's now part of my stash isn't it? Hey, I tried to stress that the 'rules' were merely suggestions. I wanted an excuse to buy this fabric and I've always wanted a Christmas quilt for my bed and it was MY BIRTHDAY!!! So now that we've cleared that up... 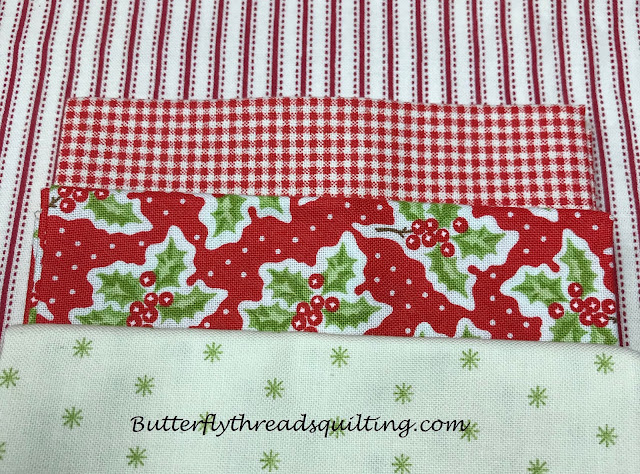 I chose the red holly fabric for my center star, the cream for the background and the tiny check for the accent fabrics for the first block. The red stripe is just for background (I bought the rest of the bolt of the stripe, not for this project but just because I love ticking. And did I mention it was my birthday?) 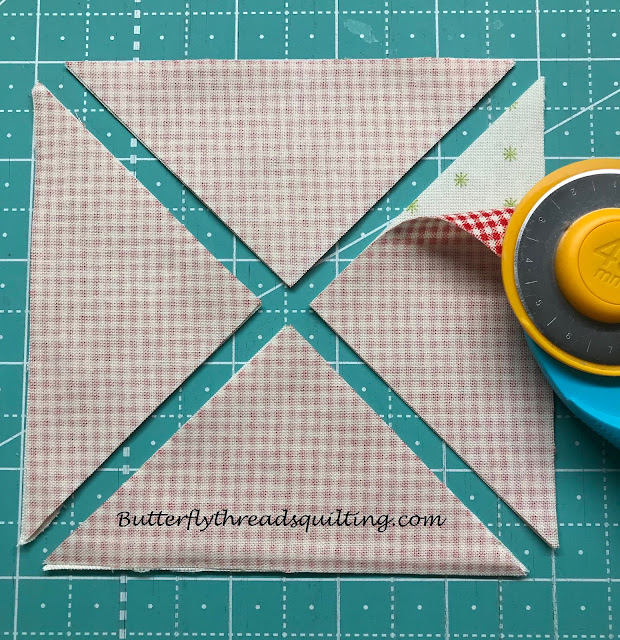 I cut the 4 1/2'' square from the background and accent fabrics (layered right sides together). Then cut them diagonally to create the four triangle pairs. 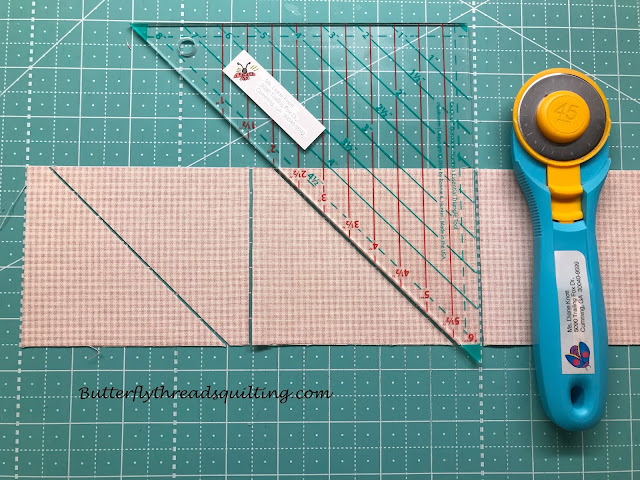 I then cut the half square triangles from the background and accent fabrics (layered right sides together) for the four corner units. 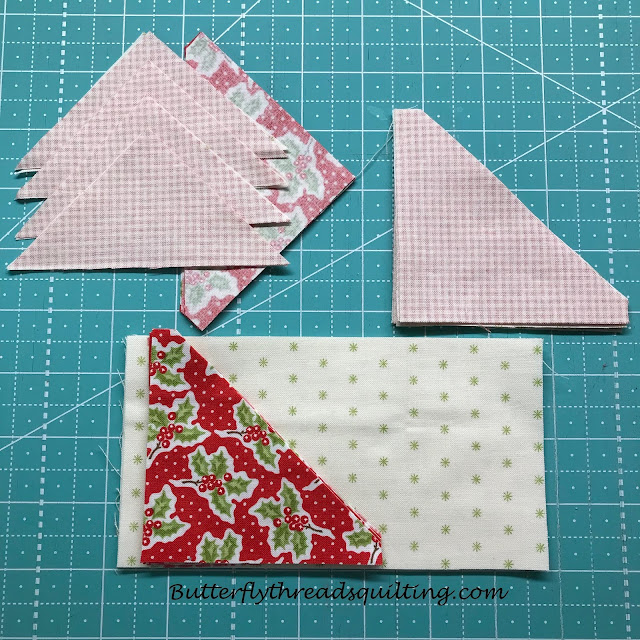 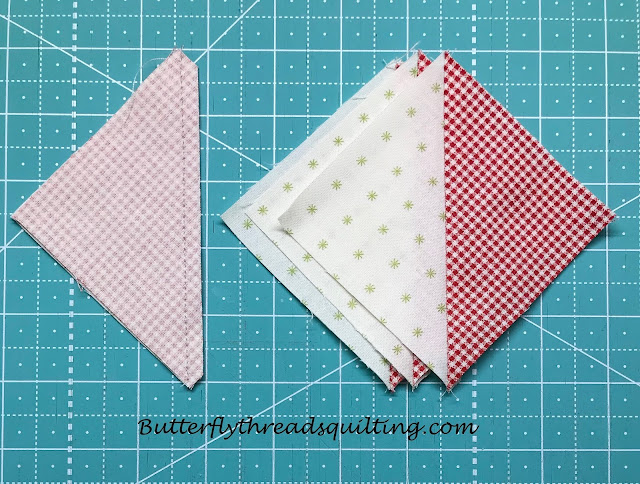 Sew the corner unit triangles along the long side of the triangles, using a 1/4'' seam allowance. Press toward the dark side. Make 4. 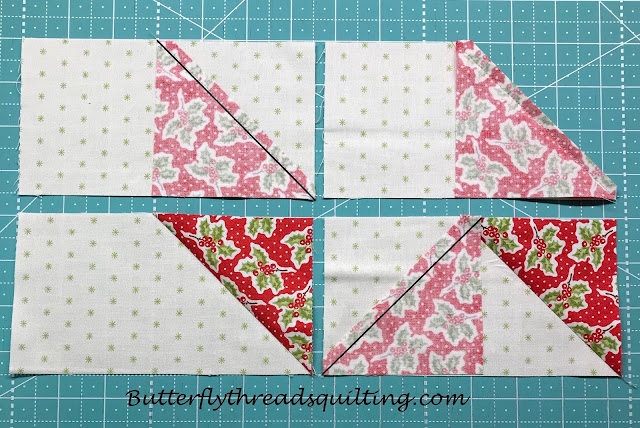 Sew a triangle to each of the flying geese background pieces as shown above. Using a 1/4'' seam allowance from the edge of the red triangle. I have a seam line marked on my sewing machine that helps with this. Trim away the excess, press away from the background. 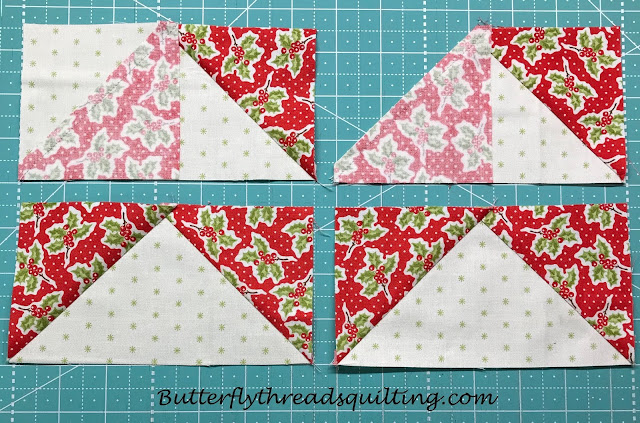 Repeat on the other side. Make 4. 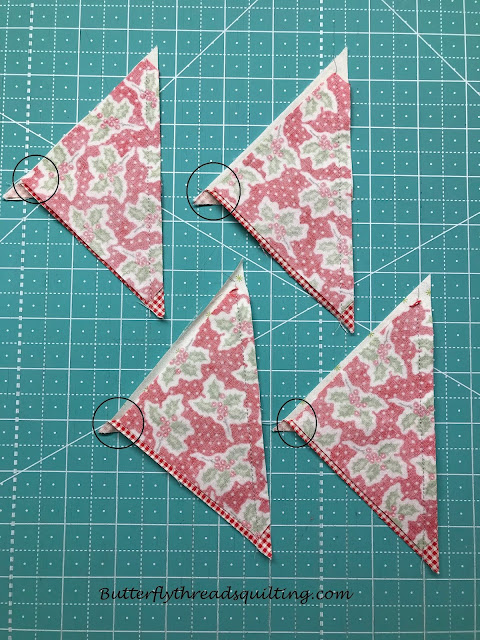 For the center units. Sew along a short side of the background accent triangles (the ones created from the square that was cut into four triangles) and press toward the dark side. Layer these with the star fabric triangles as shown above. Center the triangles on top of the pieced units so that the corner point lies directly on top of the sewn seam of the bottom unit. Use a 1/4'' seam allowance. Press toward the star fabric side. Make 4. 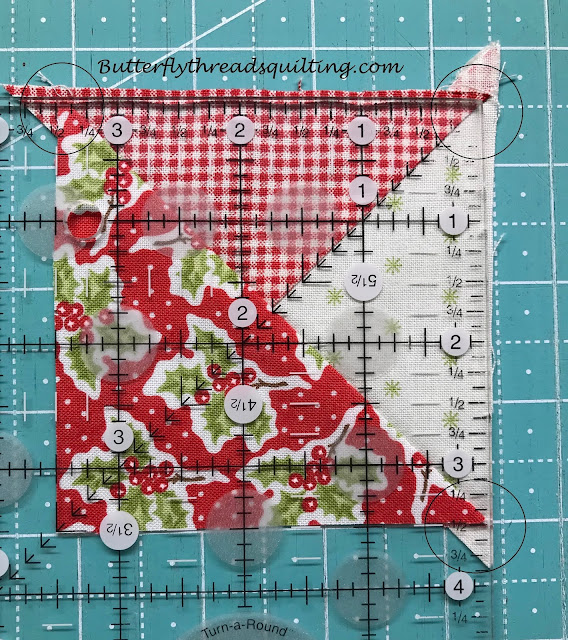 Trim the units to 3 1/2'' as shown above. Be careful to keep the seams in the corners when trimming. 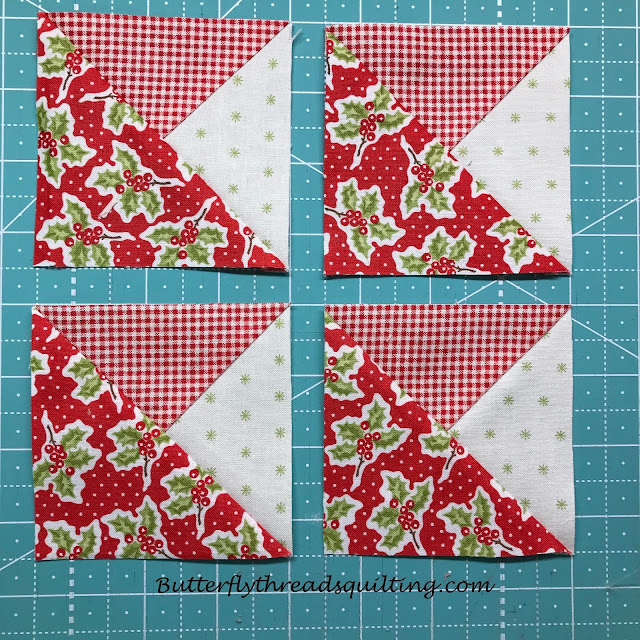 This is what your four center units will look like once they are trimmed. If your units have the background and accent fabrics place differently than mine, no worries! Your star may spin the opposite direction, but does that even matter? Not a bit! 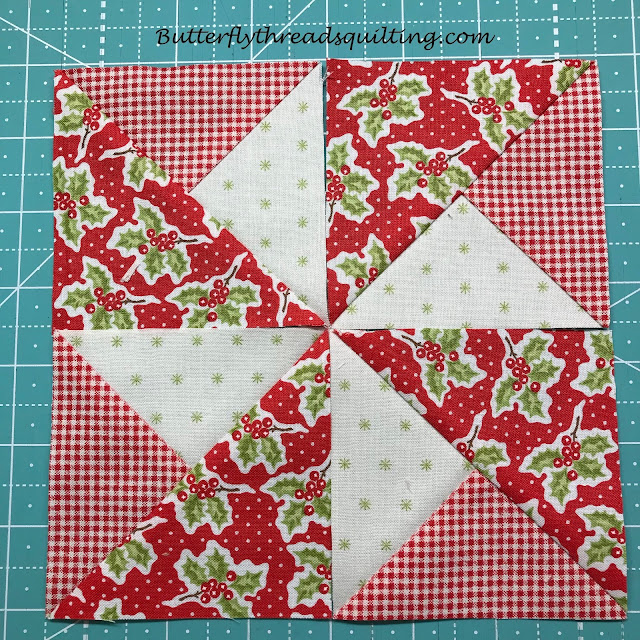 Arrange the units as shown by spinning them. Now sew them together like a four patch. 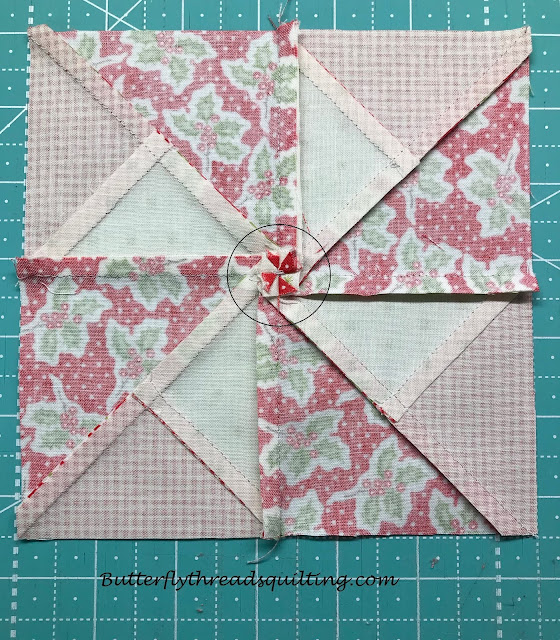 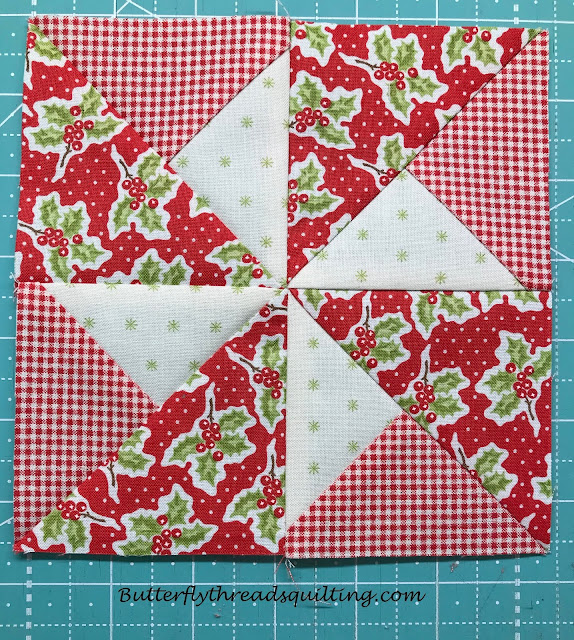 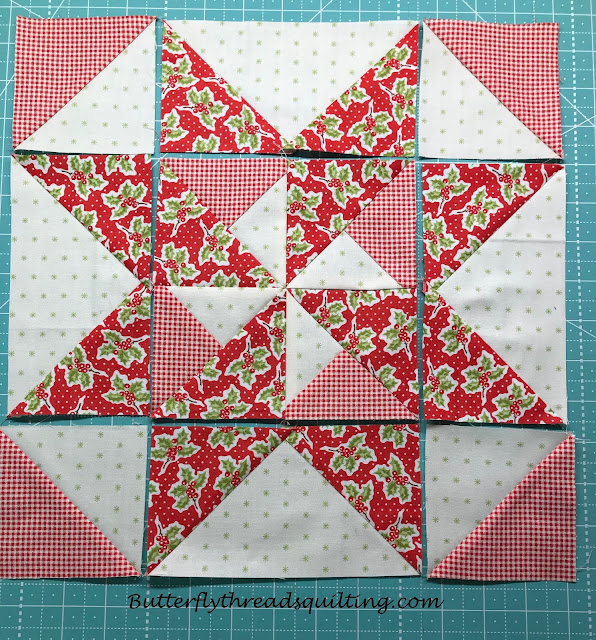 Arrange the center, corners and flying geese as shown above. Sew these together like a nine patch. 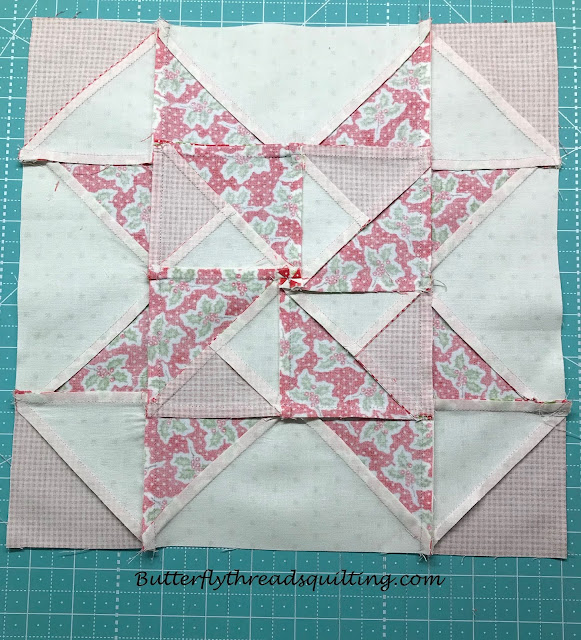 This is how I press the seams. 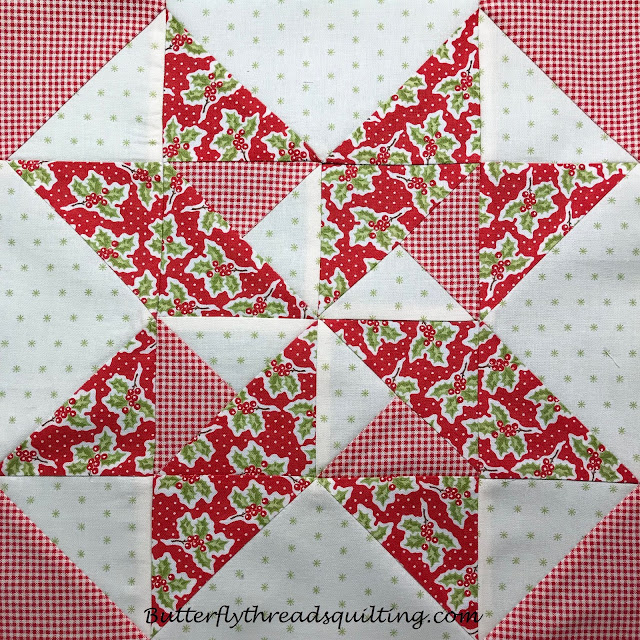 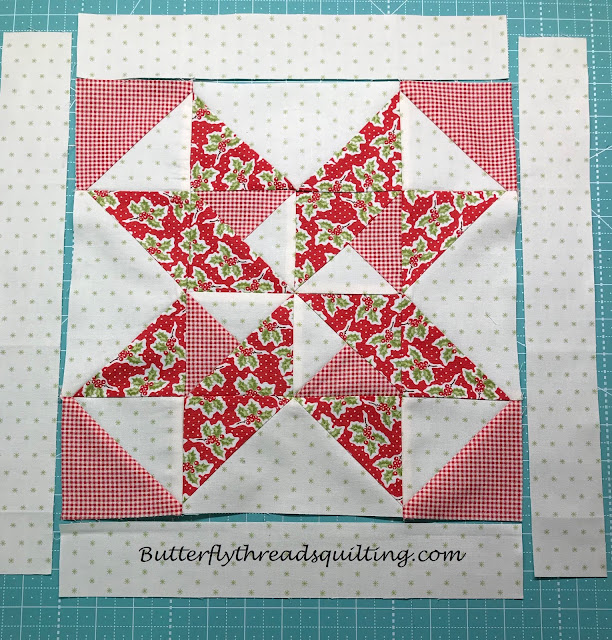 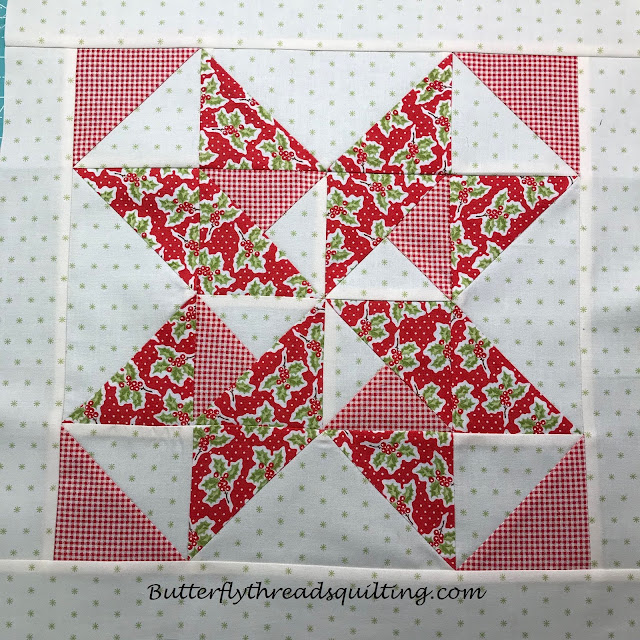 I hope you like your pretty star block! Again, these are merely suggestions, feel free to make any star block you like, or any block at all for that matter. Have fun and tag me if you share them on Instagram or Facebook. Or email the photos to me at butterflythreadsquilting@gmail.com and I will share them!

Printable instructions for the STAR BLOCK.